skip to main | skip to sidebar

"She says I shall now have one mouth more to fill and two feet the more to shoe, more disturbed nights, more laborious days, and less leisure or visiting, reading, music and drawing.

Well! This is one side of the story, to be sure, but I look at the other.

Here is a sweet, fragrant mouth to kiss; here are two more feet to make music with their pattering about my nursery. Here is a soul to train for God; and the body in which dwells is worthy of all it will cost, since it is the abode of a kingly tenant. I may see less of friends, but I have gained one dearer than them all, to whom, while I minister in Christ's name, I make a willing sacrifice of what little leisure for my own recreation my other dear darlings had left me. Yes, my precious baby, you are welcome to her time, her strength, her health, her tenderest cares, to her lifelong prayers! Oh, how rich I am, how truly, wondrously blest!"

Through the Valley of the Shadow of Death

Any time I sing a hymn or worship song to the Lord, I really think about the words.   It's the same reason I have a hard time just singing just any song.   I want to be sure of what I am singing.  I want to sing to Jesus the words with all my heart.  When I quote Scripture, I want to speak with confidence the words that I am saying. Over the years I have said Psalm 23 many times, and have taught my children to memorize it.   However, since diagnosed with cancer I can say I've chewed on "through the valley of the shadow of death" a bit more.   It's easy to "feel" that you won't fear evil when you are on the mountain praising Him.   But what about when you are trudging through the valley? 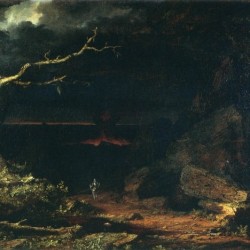 My family loves shark week on television.   Believe it or not, the first year we watched it was at our beach vacation.   What an easy week for me watching children on the shore after that night!   This year during shark week, we watched a show about 3 soldiers that were shot down during WWII and were stranded in the ocean for 47 days.   They had few rations.   They were in rubber life rafts in the middle of the ocean!  The pilot had a major head wound, and they were continually surrounded by sharks.   The pilot was a Christian who taught the others hymns, Bible verses, etc.   The Italian catholic, who was an olympic medal winner before the army, gave his life to Jesus at some point in their wanderings.  But the 3rd soldier was always worried.   He kept saying they weren't going to make it, and that they were going to die.   The others talked about life.   The olympic soldier even "cooked" for them each meal.  He would tell how his mom made lasagna and give all the details.  He would describe the bacon cooking in the morning.   Although their bodies were withering away, their skin cooked, their lips and eyes cracked, two of them kept believing the Lord would make a way and were hopeful.   If you have a chance to watch it, it's a great story so I won't give away all the details.   But the main thing that I walked away with is that the two that were full of Hope lived.   The third who kept believing they would die...died.   They were in a vast ocean with the shadow of death always surrounding their boats, but two of them held on to the Lord, hoped, and lived to tell about it.   If they had not made it, they lived their last days in hope and not despair. 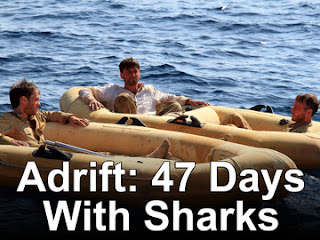 While I have been walking through this year with Satan whispering "death" in my ears and casting shadows on my way, I have found that I really am not in fear.   Not because of anything I have done, but praise God the Psalmist is right on.    He is with me!!    I love Him!  He has filled my heart with hope.   I am going to cling to Him for He is my life raft.   Psalm 31:24 tells us to be strong and take courage, all who fear the Lord.   Romans 8:35 says "Who shall separate us from the love of God?  shall tribulation or distress, or persecution, or famine, or nakedness, or peril, or the sword?"   Nothing can separate us from His love.   Not cancer, not the bad economy, not broken appliances, not even my imperfect ways.  Of course, I could ignore His goodness towards me, begin naval gazing and feel very discouraged, unloved, and mistreated.   Forget that!   I am going to keep my heart towards the Lord, rest in His provision for all things, trust His heart when I don't understand His ways, and live in His peace and joy.    I am choosing to dance through the storm. 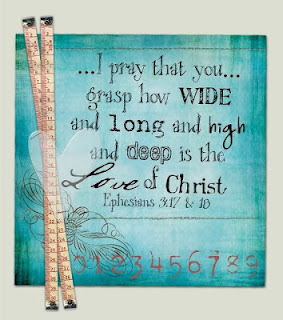 Lorretta at Dancing on the Dash said...

I am so glad to meet someone else who can not just sing any song without feeling the words...and the Scriptures too. Thank you for this wonderful reminder of what it means to live...and die, with Grace. My blog, Dancing on the Dash is has this title for this reason-- I want to DANCE on the "dash"...that space between by birth on earth date and my glorious birth into heaven date. I pray that God will continue to show me new steps along the way and I'm so thankful for the people, like you, he's given me to dance with.

Create a playlist at MixPod.com 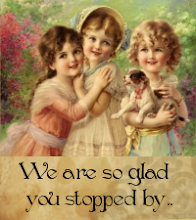 Blogs to Check out

Michelle
Child of the King who desires to glorify God and enjoy Him forever (beginning right now!) by training children for His kingdom that "I may have no greater joy than to hear that my children walk in Truth" (III Jn 1:4), that I may serve Him with joy all the days of my life, make disciples, preach the kingdom of God (Luke 9:2) heal the sick, raise the dead, cast out devils, freely I have received, freely I should give (Matt 10:8); walking out the great commission (Matt 28:18-20); and to train the younger women to love their husbands and children, to be self-controlled and pure, to be busy at home, to be kind, and to be subject to their husbands, so that no one will malign the word of God (Titus 2:4-5). And with ALL that is within me live the life that Jesus died to give me! 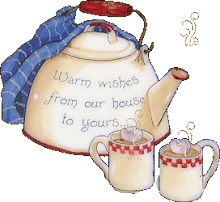